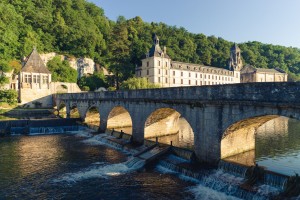 One of the main attractions of Brantôme is without a doubt its natural environment. Amongst the scenery of Périgord Vert, the village is nestled in the Dronne, sheltered by a cliff where is nested the beautiful Brantôme Abbey.

The history of Brantôme goes a long way back. In prehistoric times, the men occupied the rock overhang dug out by the Dronne. The Peyrelevade dolmen is still there acting as a testimonial of the religious manifestations that happened at that time.

In the eight century, the Benedictine monks made the most of the natural shelter offered by the cliff to settle in. From then on, the abbey never ceased growing. The tradition says that the abbey was consecrated by Charlemagne who laid the relics of a child martyr there.

Destroyed by the Normand invasions at the end of the 1rst millennium, the Abbey was developed in the 10th and 11th centuries with the construction of a roman style clock tower that is still standing over the abbey today. This clock-tower was not built on the church itself but on the rocky heights. It’s one of the oldest French steeples. The different parts of history including the English occupation saw a few parts of the abbey destroyed. It was rebuilt in the 15th century in a gothic style. In the 16th century the abbey continued to develop with a renaissance style abbot’s residence and garden.

Today, the abbey houses a cultural center with a library, an exhibition room including the gorgeous « Dortoir des Moines » room which has a superb frame made from a boat hull. It is possible to visit the abbey as well as troglodyte remnants inherited from the first monastery. A 600 meter circuit will guide you through a historical pathway with the high point being the Jugement dernier cave.

Other than the Abbey, Brantôme offers beautiful surroundings for a walk. The old town is between Middle Ages and Renaissance and is full of wonderful buildings such as the Porte des Réformés or the old Notre Dame church. Close to the Abbey you can find the old abbey gardens where the Medicis fountain is as well as the St Roch tower. This tower was built in the 12th century and once closed the abbey. It was more than likely completed by a second tower that has since been replaced by the elegant Pavillon Renaissance building.

You can find some of the most beautiful views of the Abbey and the plaza that border it, from the Coudé bridge that crosses the Dronne and under which a number of canoes go by in the summer. It also allows you to access the Moines garden, a very enjoyable park where you can feed the ducks that swim in the Dronne.

One of the best times to visit Brantôme is Friday morning for the market. The town livens up and offers the opportunity to taste some of the gourmet specialties that have made the reputation of Périgord.

Sprawled out over the north crescent of the Dordogne the Périgord Vert is qualified as such because of its luxurious flora, the presence of a great number of watercourses (the Dronne, the Isle, the Auvézère or the Bandiat…) and its rich historical landscape.

These assets are the reason the regional natural park of Périgord Limousin was created and is laid out over two counties.

It has developed the local resources and expertise.

In the confines of Charente, the wooded hills, the cultivated fields as well as the Double forest with its ponds, form the sweet tranquility of the Val de Dronne.

On top of the natural appeal of this country you can add the charm of its traditional habitat, the roman art, and the architectural treasures to be discovered in Brantôme or in St Jean de Côle… 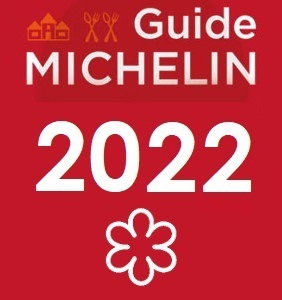